Backstage at The Life Scientific

One of the biggest challenges I’ve come across when doing interviews for a radio piece or podcast, is that you have to be able to do many things at once: listen to the speaker, follow your set questions, remember things the interviewee has said so you can ask more questions, don’t go too far off on a tangent and keep to time. This is when I’ve been doing pre-recorded stuff. On my own. On topics that I hardly know anything about.

I love a good challenge.

So it was interesting to see how a team of people can work together to create a great piece of radio. This week, I got to sit backstage  for the prerecording of an interview with Lord John Krebs and Prof Jim Al-Khalili for The Life Scientific.

When I’ve listened to The Life Scientific on air, it sounds seamless, as if the conversation just flowed simply and elegantly. The show is only half an hour long when it is aired. I was backstage for almost two.

The stories that Lord Krebs had to tell were incredible! He has this way of luring you into a story; a deep voice, calm, but enthusiastic in just the right places. Great pauses to add dramatic effect. His storytelling was a work of art in itself. The producer will have plenty of material to work with when it comes down to selecting the best stories for the show. This could take days… 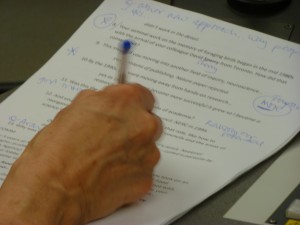 Deborah Cohen, who is the head of the BBC Radio 4 Science Unit was the producer for this episode; and she is a fantastic multi-tasker. I watched her edit the script whilst listening to the recording, tell Jim to ask more questions, make endless notes and chat on the phone. The list goes on. This woman was able to do everything at once.

I am assuming that this comes with experience in the business (she’s been doing this for 25 years). I was thinking to myself – wouldn’t it be lovely if I could have someone like Deborah sit behind a screen and listen to my interviews, tell me some extra questions to ask, whether or not to stop the interviewee talking at a certain point.

It was the way in which Deborah, the studio manager Sue and Jim worked together as a team that made the whole thing work. Jim had the freedom to veer off script every now and again, when he thought there was something else that needed to be asked, a detail that needed explaining, or an extra little nugget that would complete the story.

When Deborah was making mental, and physical, notes of the interview, every now-and-then she would ask Jim (by pressing a button on the dash board to speak only to Jim through earphones) to ask a question, or to get Lord Krebs to repeat something. It was the gentle, unobtrusive style she had that made this possible. Jim never even let it show to Lord Krebs that he had just heard another voice in his ear. Can you imagine if you had a producer who was going “OOOH say this, OOOOH ask that, wait he needs to explain that, get her to say that again…” this constant second voice in your ear would be infuriating, and nerve-racking. Plus, it would also be distracting as you would lose focus on the answers being provided to you by the interviewer.

So, Lord Krebs has a rather interesting story to tell (I won’t spoil it for you here), and so I was totally engrossed. I could hardly think/concentrate on anything else because it was fascinating. To be able to remove yourself, just a little, from such a great story to be critical about it, question it, and know where to dig a little deeper is a skill I am still working on.

I spoke to Jim a few weeks ago about his life as a scientist and science communicator. You can find the interview on Speaking of Science.