Infographics and data visualisations are becoming increasingly popular, and you see them almost everywhere you look. But what is their visual legacy? How has data visualisation evolved over time and what role does it play in science today? The British Library is opening their first science exhibition on February 20th: Beautiful Data, exploring exactly that.

The curator Joanne Kieniewicz chose three topics to focus on: climate, population health and evolution. Each part of the exhibition starts with just pure data collected in the late 1600’s early 1700’s, and moves on to how that data is being used in contemporary science. Not only that, but it also shows how the visuals have changed over time from static images on a page to interactive ones on a screen.

It was incredible to see the emotive power behind some of the visuals. The weather, for example, is one which we are all familiar with. Luke Howard, a 19th century amateur scientists who took obsessive measurements of the weather and logged them in his Barometrographia. As well as the imagery, he made comments about his data (some of which sound familiar today!) To complement this with a more modern view, there was a Dutch design studio poster where tweets about the weather were compared to actual weather predictions and measurements made.

Edward Halley the astronomer drew a map of how the winds moved across the surface of the Earth. He wanted this map to tell a story, and to help those travelling the globe. In contrast, there was the NASA perpetual Ocean imagery which is an animation showing how ocean currents have moved and changed over the years. 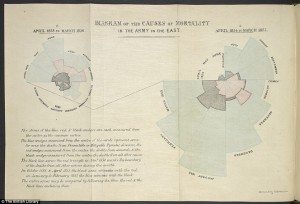 In the health section, it was Florence Nightingales’ Crimean War data visuals that were the most politically driven, and shocking. She wanted to get the attention of the government, to show them that more of their brave soldiers in the war were dying in the hospitals than on the battle fields. Her drive was to get sanitation policies changed. The area of each region shows the number of soldiers who died of wounds, disease, or other causes, during each month of the Crimean War.

If Nightingale had used a simple bar chart or had just presented her data in a table, it would not have been as effective. At the exhibition there was a computer that allowed you to do just that, and the difference is striking. The visuals tell a definite story.

The final part of the exhibition was The Tree of Life, spanning from Darwin and his incredible … and others all the way to modern-day digital visualisations like Martin Krzywinski’s Circles of Life.

These visuals are not just important for communicating between those in the same field, but to those outside of your field too. 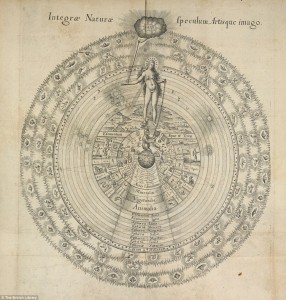 For example, Robert Fludds’ Great Chain of Being from 1617 classifies life on Earth into a hierarchy that seemed to fit the social beliefs of the day. You wouldn’t see that today. Instead OneZoom, an online platform with a fractal-like representation of all life on Earth, shows a very different approach to our connection to all creatures on Earth.

It’s a visual exploration, very much like our personal, every day exploration of the world around us. We use our eyes, focus in on something, or take a step back and zoom out to see the bigger picture. This is what James Rosindell envisioned for the project. He wanted people to be able to see our relationships to other creatures in the same way as we explore our own world.

What the exhibition shows is that our relationship with visual data continues to develop and grow as the volume of data grows.

The exhibition is open from February 20th until May 26th, and is definitely worth a visit.