A different pair of shoes 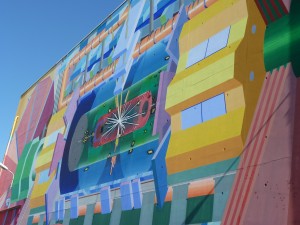 It’s funny, isn’t it? The phrase, walk a mile in another’s shoes? Who would want to do that? I mean, their feet probably aren’t the same size as your own, and did an awful lot of sweating which would make them smell bad…. doesn’t sound so good.

This becomes even more interesting when the shoes you put on are a pair of your old ones. Will it still be so bad?

In 2007 I went on a school trip to CERN. It was the most exciting thing that had happened to me since I quit swimming. I was determined to be a physicist, and so where else should I go than to the Holy Grail of physics? At the time, I observed the place in utter awe. they were still building the detectors, and I remember going down to see CMS in construction. The huge, over powering detectors towering over you, the infinite number of cables running everywhere, the constant buzz of physics. It was a little bit of a high.

Today I’ve been back to CERN, and I thought I would be donning my old pair of shoes that I wore whilst visiting in 2007.

Turns out, I went in my new shoes, a pair of shoes that has walked through a year of doing an MSc in Science Communication. And with these shoes, CERN is  a whole different beast.

As part of my placement with the Citizen Cyberlab group, I’m putting together 2 short films: one about Test4Theory, a citizen science project. My role is to make one film for Test4Theory, and another to capture the creativity and excitement surrounding the CERN Summer Webfest 2013.

CERN today was not a place of physics and particles as much as it was about the beauty of the experiments, the clarity of the workmanship, and the collaboration between different engineers and scientists to build a spectacular thing. 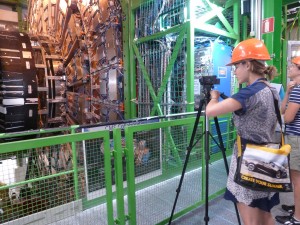 And with a camera in your hand (or on your tripod), it is these things that you want to capture: the scale of the detectors (6 stories high), the depth of the tunnels (97m below), the millions of wires (only 3 in a million are wrongly connected) and many more things.

It was a little overwhelming, to see all these things so differently.

I really enjoyed it.

Also – I got to do some filming and interviewing at CERN…. that was an exciting concept in itself!