Exploring the nature of science

What is the nature of science?

Less than a year ago I would have said the nature of science is the way science is done: the equipment used, how experiments are conducted, how results are analysed, how the science is applied. All the things that I believed science consisted of.

That was before I dipped my toes into the vast pool that is philosophy. Now the question has many different interpretations. In class today we got into groups and were set the task to come up with a way of exploring the nature of science. We were required to pitch our ideas in five minutes to the rest of the class. We could use exhibitions, television, drama, music, artefacts, anything we liked… which made that task a whole lot more difficult.

Our group decided to look at perceptions. One of the philosophers we studied, Hanson, said that the way we SEE things depends significantly on our background, cultural upbringing, values, morals, the works. He applied this to science too: the way results are interpreted ultimately depend on the interpreter. This is why working in groups can sometimes be very beneficial, as some people will see things that others don’t, different points of view can be offered. The saying “two heads are better than one” does have a significant meaning to it. Hanson also plays with the concept that if you don’t know what you are looking for, or don’t understand what you see, you won’t SEE it.

For example, if I showed you this picture on the left, only those who have an understanding of particle physics could actually extract physical meaning from it, those that don’t  would only see it as pretty lines.

We wanted to explore the idea that science is not just about absorbing information that you are given, the information that you see. There is so much out there that you can’t see, or sense in another way, that ultimately exists. A good example for this is space. Cosmologists look deep into space using telescopes with different wavelengths. If they only used their eyes and the visible part of the spectrum, they would only see the closest and brightest stars on a dark background. When they use x-rays, microwaves, infra-red, they see a whole host of other beautiful, and natural things that we wouldn’t see with our naked eyes. The same principle can be applied to microscopes.

There are whole worlds out there that we cannot see with the naked eye, and science had invented ways of seeing them. But without the training and understanding of what the science is looking at, you won’t necessarily understand the images. So our group decided to explore the way we perceive things using an exhibition which would have four different rooms, each exploring a different aspect.

The first room would be a type of mirror maze, with mirrors that distort your reflection (concave, convex, bit of both). This would represent how your values, preconceptions and potentially the media could distort your views of reality, and science. On each mirror we would place a question related to science, and how it could be distorted, making it easier for people to relate the mirrors to science. 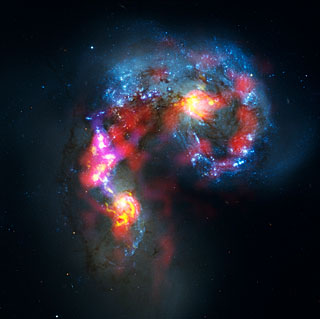 The second room would contain items that explore the concept of vision using different parts of the electromagnetic spectrum. There would be photos of something like the Antennae Galaxies, but in different frequencies. We could also have an infra-red camera that the audience could interact with, which would show them up in a different light. Using a UV light we could show how sun cream works. It would demonstrate that looking at things using different frequencies show a whole different world, which is still part of this one. You can infer a whole new lot of information from looking at things in a different light (pun intended).

The third room would explore optical illusions. Duck-rabbit, Rubin’s vase, and other classics that would show how there is always more than one way of seeing things. Hanson’s idea was that if you didn’t know what a duck was, you wouldn’t see a duck, you’d see a rabbit, and vice versa: your past experiences affect your current perceptions.

The fourth and final room would be a cinema in which a video of a netball game with a gorilla wondering though is played. The audience would be asked to count the number of passes between the players as the film goes on. At the end a question would pop up asking them if they saw the giant gorilla. The video would be replayed and everyone would look for the gorilla, which would seem obvious. It would demonstrate that if you are concentrating and looking for something in particular, you could miss the bigger picture.

When the Europeans invaded America they anchored their large ships out at sea and came to shore using small rowing boats. The natives didn’t see them coming until it was too late. They didn’t understand, or know about the large ships and so didn’t see them.

We wanted people to grasp that science and observation are very intimately linked, that it is difficult to have one without the other. One of the aims of the exhibition would be to get people to think that there is more to science than meets the eye. That you should question reality, question science, and that the nature of science ultimately depends on how you interpret it.

All the other groups had some fantastic ideas too, with philosophy on toilet paper, labyrinths, movies and more. I am very much looking forward to hearing the other ideas next week too!