If you’re anything like me, the term Bitcoin would have meant very little. When glancing at the word, it could have either meant a part of a coin, or a coin worth one bit (a small packet of data on a computer). So, as there has been rather a lot of talk about them, I thought I’d find out what it was all about.

Before using pounds and dollars, you would use solid gold in exchange for goods. There was a limited supply of gold, so its’ value was inflexible. When we started using the currencies we know today, their value was compared to that of gold; this was the Classical Gold Standard, and it started changing at the beginning of the 20th century.

By having currencies measured against the value of gold, they could not be manipulated by governments. So, using political means, money was changed from the inflexible to the flexible; centralised banks now control national economies and fund the state, yielding power over money, international exports and people.

So for a currency that is still a speck on the global monetary landscape, Bitcoins shook things up in April 2013. The value of an individual Bitcoin, which was at just over $20 in February, had risen to record highs of about $250, before plummeting down to below $100 on April 11th. With all this excitement, what exactly is a Bitcoin?

A Bitcoin is a bit like gold, but for computer geeks. It is an experimental digital currency that exists only in limited supply; a truly digital commodity in the realms of the internet. So like gold, it is in finite supply and does not have a central bank watching over it: in theory, it should be free from meddling governments, and they exist on every participating computer simultaneously.

To get your hands on some, you can generate them yourself by downloading a piece of software called a Bitcoin Miner (building on the gold and geek metaphor), which will work to solve an algorithm, and then pay you 25 Bitcoins for each algorithm solved. The number of Bitcoins available is capped at only 21 million. But as more algorithms are solved, and more Bitcoins are mined, how is this supply ever going to stay capped? As the number of mined Bitcoins increases, the algorithm becomes more difficult to solve, thus timing out the supply. You can also get some using regular currency; you can buy Bitcoins from somewhere like the Bitcoin exchange Mt.Gox where you can convert fiat currency into Bitcoins, or from someone who already has some.

What can we use them for? Well, like any regular currency, you use them to buy things, but not everyone accepts Bitcoins yet. Bitmit, is the EBay equivalent for the Bitcoin world, and there are some brick and mortar places that accept them; Kreutzberg in Berlin is so far the most active in Bitcoin trading. There have been people who are actually minting a physical version of the Bitcoin, making it a kind of prepaid cash. Gavin Anderson, the 46-year old software developer for the Bitcoin foundation gets his entire salary in Bitcoins. For the more illicit trades, Silk Road is popular for Bitcoin users.

One of the advantages of Bitcoins, is that there is no middle man handling the transactions, ultimately making them cheaper. If you want to send someone some coins, you just send it to them. When you make a transfer, an electronic signature is added. After a few minutes, the transaction is verified by a miner, and permanently stored in a public network for all to see.

For the governments, this isn’t all that great; they will start losing control of money, transactions, and following that, control of people. The politicians are entirely removed from the Bitcoin monetary loop, which makes them all the more attractive.

But, Bitcoins, unlike the fiat currencies we are all used to, is not legal tender for paring debts. So why do we need them? Not every country is responsible. Zimbabwe, for example, at one point had a 1-trillian dollar bill. It will also have been difficult to miss that we’re in a financial crisis; the banks in Cyprus froze all accounts]. No one is allowed to access their cash, and if the banks in Cyprus go bust, only 100,000 Euros is guaranteed. The rest will be used to save the banks. With the current economic climate, this could potentially happen elsewhere in Europe. So what could become the norm is that people would convert their pounds/euros into Bitcoins, and then sell them for dollars, therefore escaping a financial crisis.

So could Bitcoins be the new gold? Without banks, middlemen and fees, they look pretty good from the outset. If Bitcoins were to take off, could they potentially re-stabilise the international financial markets?

Right now, it seems that the only people using Bitcoins are those who are the geeks, those who are fascinated by the technology. There are also those using it who detest the banking systems. So could more people become involved, or is it just gold for geeks?

But, if the demand does go up beyond its supply it will force the value of each one up too. This will force the price of goods down over time. So could this inevitable destructive deflation cause economic disaster? Economic disasters have been known to be associated with deflation, but so have benefits. Falling prices could encourage people to save instead of spend, and lend instead of borrow. And all the benefits listed above make it all rather attractive.

But there are still problems with this “virtual gold”. Your transactions are also entirely irreversible, and uninsured. So if your Bitcoins get lost into the ether, that’s it. 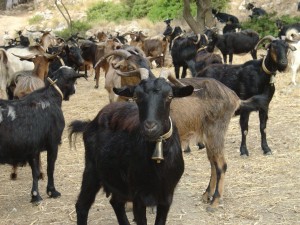 When playing the stock market, there is a technique called selling short, which enables someone to turn a stable market into a volatile one by selling a commodity before you own it. For example, say I had a customer who wanted to buy ten goats, but even though I didn’t have them right now, I know where to get some in two months time. So, if the price per goat right now is $12, I can say to my customer “I can sell you ten goats for $10 a goat, in two months time.” This will look like a bargain to the customer. And, it will drive the prices down. In two months time when I get my customer the goats, I happen to find that the price of a goat has dropped to $8 a goat, I will make a profit of $2 per goat, $20 over all. Jackpot. So, if this type of manipulation is doable on the stock markets, it is definitely doable on Bitcoins, as they exist on the stock market.

Bitcoin value can also be influenced using distributed denial-of-service (DDOS) attacks during a Bitcoin exchange. This is when a server that is receiving Bitcoins is flooded with more junk-data than it can handle. The server is then not able to distinguish between the good data (your Bitcoins) and the bad, junk data. Someone else can then come in and hack the system, and steel your Bitcoins right form under your nose.

The changing value of any fiat currency, including digital ones, is speculative, and subjective. Even the price of gold, which (in theory) is in finite supply, could change overnight if a giant comet, made entirely of gold, came floating by. But how much value would you put on a bunch of numbers that only exist where you can’t really see them? The only thing that is giving these Bitcoins any value, it people believing that they have value, which is exactly the same for fiat currencies. So in reality, all currencies have value because people have faith in them. In other words, people have faith in the government that they won’t keep printing dollars so that they become worthless. And sure, the same is true for gold, but with gold, you can make jewellery, which has its uses.

So I wouldn’t rush in making predictions about whether or not digital currencies are to become the new face of trades. They are still experimental, small, and in development. Keep your eyes on them, but understand that they are, like any currency, open to continuous fluctuation.

So should we all start mining and buying Bitcoins? As it’s still an experiment for those who understand the Bitcoin systems (the geeks), I would only put in what you can afford to lose. If only the investors could follow this advice with fiat currencies!