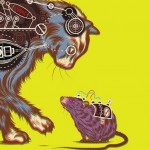 Dolphins with prosthetic tails, spy beetles armed with robots, resurrected pets from frozen DNA… You name it, they’re doing it. Scientists from all over the world have been creating animals that fit our whimsical needs. But should we have the power to play god and invent the fauna of the future? And where do we draw the line? What if a mouse could be engineered to prevent it from feeling pain – would this mean animal testing was no longer an issue?