Inspired by nature, created by science.

Science can be thought of as the study of nature, the discovery of what makes our world tick. By observing the natural world scientists learn what it is made up of, how species go about their daily lives, and how they have evolved to overcome difficult situations.

Science sometimes takes small parts of nature into the lab to study them under controlled conditions. Some have argued that by removing all the variables, you no longer study nature. You have taken it out of context.

In some cases, I agree. It is difficult to imagine that cells swimming around in a petri dish behave in the same was as they do in our bodies or in a plant. There are many more factors influencing the cells when they are in their natural environment. And not just the factors that govern our internal systems, but external factors will have an effect too. Yet when we are trying to understand something by observing what it is made from, the laboratory becomes the perfect place to look without external interference.

Engineers and scientists are imitating nature. They have realised that nature knows best. The natural world evolves to utilise it’s best assets in any way it can, and humans, although a while back now, have cottoned onto this.

This summer I worked on a project called Strictly Engineering for the British Science Association. The aim of the project was for engineers to reduce their research to the basic foundations and display these on a poster. The poster was to be as simplistic as possible whilst still conveying the research. At the same time the engineers had to learn how to communicate their research to a completely inexperienced audience. There was a competition associated for the best poster, and best communicator. 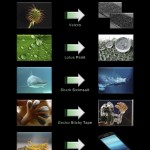 One of my favourite posters was by James Windmill from the University of Strathclyde, who had been researching the hearing abilities insects to see if they could base a microphone on it. His work involved looking at a natural phenomenon to see what we could learn from it, and how we could make new technologies based on what evolution had naturally done on its’ own.

Velcro is one invention that everyone is aware of. But one that I have been most familiar with is the Sharkskin swimsuit. The swimsuit is based, as the name states, on the skin of a shark. From far away, the skin of a shark looks smooth and sleek; streamlined to allow it to move efficiently through the water. When you zoom in and take a closer look, a shark has grooves running along the length of it which channel the water through it. This levels out the flow of the water over the shark, controlling in and reducing the turbulence. Sharkskin swimsuits have similar grooves running along their length, so that when you race in them, the water is channeled along your body, flowing in a much more controlled manner. This improves your streamlining, and is thought to improve your speed through the water.

When children come into this world, their parents are their first port of call when it comes to learning about the world. And more often than not you will see children imitating their parents. I have definitely been one of those, trotting around after my mother in her high heels and pretending to feed my doll… So scientists can not only learn about nature, they are also learning from nature.

I would like to try to start a series of blog posts called Inspired by Nature in which I will try to explore how science is using nature to come up with new technologies (try being the operative word here). I know it has been done before…but it’s more for my interest and practise!