Monsters inside your head 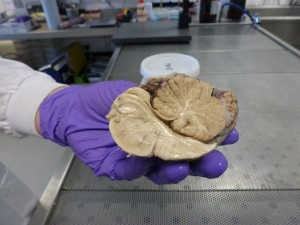 For someone who hasn’t had any brain afflictions, it’s rather difficult to image what it must be like to be dealing with one. These monsters inside people’s heads only show themselves as symptoms, which can be rather frustrating, especially if you don’t know what is causing them.

I’m exploring how people with neurodegenerative diseases cope with these monsters, and whether or not seeing them makes any difference.

People who suffer with neurodegenerative diseases are dealing with these “monsters” all the time, and as primarily visual creatures, it’s difficult to relate to this monster, when you cannot see what it is doing, or how it is doing it.

Recently I heard a story (I can’t, for the life of me remember on which podcast, so if you recognise the story, PLEASE tell me where it is!!) about a young lady who had chronic back pain, and had tried everything to try and get it under control. Scientists put her into an MRI scanner, and placed a monitor above her head, so that she could see the MRI scan as it was happening. What they showed her were the parts of her brain that were “lighting up” with activity when she was in pain. She described it as a flame, which was almost analogous to the pain she was feeling in her back. By being able to see it however, she was able to control it: to dim the flame, and eventually, blow it out all together.

As primarily visual creatures, we are able to build strong relationships with objects when we see them. So would those with neurodegenerative diseases have a different relationship with their brains (and what’s not quite working inside them) if they could actually see where the problems are?

Hammersmith Hospital is home to the Tissue Bank, or Brain Bank as it’s more commonly known, and once a week they allow the public to come in and have a look at some brains, and how they are prepared for research.

Here’s a tiny snippet of the tour I had. It was incredibly fascinating to see how the scientists prepare the brains for research. This little clip particularly looks at how patients react to seeing brains which have their afflictions, how you can identify if a brain has Parkinsons, and how important it is for the research to get donations. 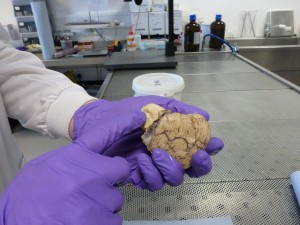 If you have a neurodegenerative disease, I would be interested to hear how you deal with it, and whether or not it would be different if you would be able to see a piece of brain that showed exactly where the monsters were hiding.