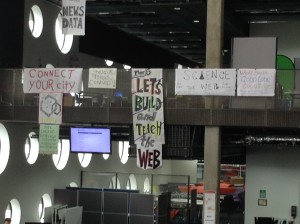 This podcast originally appeared on the Pod Delusion, episode 211 on November 1st 2013.

Mozfest 2013 was held at Ravensbourne and spanned all 8 floors, each one hosting a variety of web-based activities.

In this podcast I focussed mostly on the science aspect of the MozFest 2013 to explore where they are headed with this.

The Mozilla Foundation was launching their new Mozilla Science Lab – which will be exploring all things open science, and will be helping institutions the world over get to grips with it.

In this podcast I bring you a bit of a feel for the atmosphere, a watercolour painting robot, an interview with Mark Surman (The Mozilla Foundation Director) and Kaitlin Thaney, the director of the Mozilla Science Lab.

At the end of the podcast I explore what Open Science means with some of the delegates that attended.

you can read more about my Mozfest experiences in my blog posts: Open Science and A Fireside Chat About Science