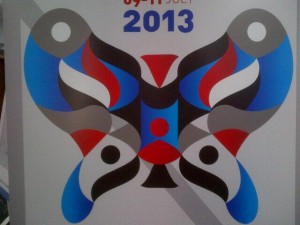 Some thoughts from an outsider on what I learned sitting at the edges of SB6.0, July 10th 2013

You know that feeling? That feeling when you walk from a hot, sticky street after walking somewhere into the cool, refreshing air of an air-conditioned building? (I bet we’re all wishing we had a bit more of that now anyway) That feeling that changes your mood, the atmosphere around you?

Today I felt something similar, but when I walked into the SynBioBeta meeting at SB6.0 tonight at Imperial College.

The atmosphere was electric – there was so much excitement and energy in the room it was impossible to contain, and you could feel it, as soon as you walked through the doors.

SynBioBeta facilitates meetings between synthetic biology start-ups and investors: people with ideas and people with money. It’s a good mix to have.

Kicking the evening off was wine/beer/alcohol (always a good start) and networking, finding out who’s who.

Then came the lighting talks: 15 start-ups got to hold everyone’s attention for 2 minutes to make their pitch – to tell the room their story.

I’ve come across the ideas of stories a lot today, and it seems to be the consensus amongst many at SB6.0 that MORE stories need to be told. The power of stories is incredible – you can weave and intertwine so many ideas together into a coherent whole using stories. You can pitch ideas using stories. Stories are what sell ideas.

I think this is something that the speakers at this evening’s talk will have come away with. It was extremely clear to the audience which pitches had the best stories, and it was those that held the audiences attention. Even if an idea was the most fantastic, the most amazing, the most incredible ever, if you don’t tell it in the right way, unfortunately it might be missed. My personal favourites has a clear idea of what problems their ideas solved: one team told of their idea to remove dengue fever from planet Earth “untold suffering and economic loss….the most dangerous animal in the world…we can keep your citizens free of disease” and ” Imagine” was used 3 times by another pitcher.

The way you tell your story depends entirely on who you tell it to. This is for all walks of life, especially when it comes to communicating science. And pitching a business idea based on science is definitely a form of science communication.

So, if you are a start-up in synthetic biology, there were two key messages to take away from tonight’s panel discussion:

1) make sure you know exactly what your audience knows about the world of synthetic biology, and pitch your idea appropriately. Much was said about how many investors don’t like the idea of investing in biology, or biotechnology, but prefer to hear about technology on its own. So, tell them your ideas from the point of view of technology. Rob Carlson’s book Biology IS Technology tells you that this is entirely possible. Also, those that are investing are investing in YOU, and what problems YOU are solving, not necessarily the science.

2) thing about is that the UK is a “graveyard for biotechnology” (GM debates from a few decades ago did not do the biotech image any favours) according to one member on the panel. Investment is determined by the political landscape, which in turn is dependent on the public landscape. If the public don’t like GM, it won’t get much investment. This is a call to action to get the public on your side! Get them to see the incredible potential that synthetic biology has, BUT DON’T FORGET TO TELL THEM THAT YOU UNDERSTAND AND ARE AWARE OF THE RISKS. The public (i.e. those that are not within the synthetic biology research field or industry) are very aware to risks, and are easily afraid/wary of what they don’t understand.

From what I’ve seen, those in the field of synthetic biology are extremely aware of the risks, and are taking steps to make sure that they are minimised as much as possible: SO TELL PEOPLE YOU ARE DOING THIS!

What was another interesting discussion (or conflict of ideas) during the discussion panel was that some people want to invest in software platforms that facilitate the development of ideas into products, whereas other investors thought that the platforms are not where the money is – they thought the money is in the product/technology itself. At least that means that there is interest for both types of idea!

There were other things that I learned about today:
– there isn’t (at the moment) a lot of investment in synthetic biology start-ups or university spin-offs in the UK.
– an increasing the amount of regulation in synthetic biology will increase the amount of “black market” synthetic biology. This is a concern within the community. Synthetic biology is constantly being described as open source, accessible to every one, willing to share its ideas to help future developments. If this becomes too regulated, and not everyone has equal (or any) access; it will drive some to do things behind closed doors. So keep it open, keep it simple, and let innovation strive.

I’m going back tomorrow, because I can’t resist being with such innovative people filled with ideas. I also can’t resist because there are so many great stories waiting to be told.

One Response to Ideas + money = innovation